Why didn’t you know that? What the hell have I been talking about all month ya dinguses! Don’t you all have egg on your face. END_OF_DOCUMENT_TOKEN_TO_BE_REPLACED 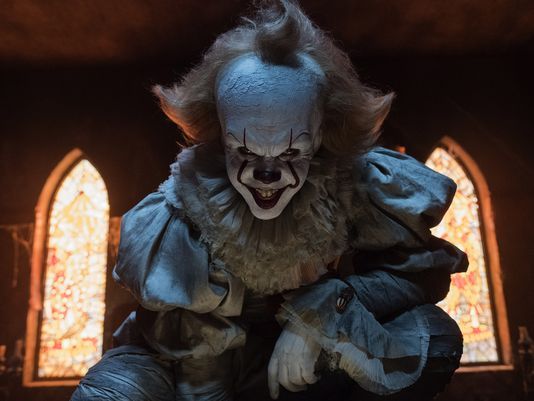 The last time I went to see a movie in the theater more than once was The Avengers back in 2012. If I may take an immediate digression – The Avengers only came out 5 years ago!? It feels like it’s been decades. I know this is because Marvel puts out approximately 700 movies per year. Point is, I don’t usually go the theater for the same movie more than once. So far I’ve seen IT three times. Partly that speaks to how obsessed I am with the story – have I mentioned how much I love the book – but I swear it also speaks to the quality of the movie.

This is a good movie ya’ll! Let’s talk a little about why. END_OF_DOCUMENT_TOKEN_TO_BE_REPLACED

Hello friends and neighbors and welcome to my most self-indulgent feature yet! I’ve mentioned before that IT is my favorite book and you guys know that October is my favorite month. So I decided to make a big ol’ Reese’s Cup out of that shiet and mash em together! All month I’ll be reviewing IT in its various forms starting at the worst and ending with the best. And you might be surprised by the order!

But you won’t. The book is the best form. Come on guys.

And the worst is the 1990 miniseries. No review of the miniseries can be complete without the caveat that Tim Curry is a great Pennywise. He is for the most part but mostly because he’s being Tim Curry in clown makeup. But how does the rest of it hold up? Let’s find out! END_OF_DOCUMENT_TOKEN_TO_BE_REPLACED

Hello you vampiric beasts from between dimensions, Super Hubs here with a very quick review that I’m positively giddy to write! It’s been a crazy year for me, vis-a-vis Stephen King adaptations as two of my favorite books have gotten movies! And while The Dark Tower needed a few caveats and asterisks for my enjoyment, this movie is just simply phenomenal!

I’ve written before about how difficult it is for me to review things that I love. It’s for this reason that I’ve never reviewed IT. IT is my favorite book of all time by a wide margin. I’m sure I’ve mentioned that before and I’m sure I’ve mentioned before that I read the book at least once a year. I’m crazy about it ya’ll! And so when it was announced all the way back in 2009 that IT would be getting a new film treatment, one that would stick much closer to the tone of the book, I flipped my shit. I’ve been wanting this for so long guys. I love the old miniseries, but no one has ever accused it of actually being scary. Or good. Really the only reason anyone remembers it is because of Tim Curry who – despite some solid performances from both the child and adult actors – easily steals the show. But this movie guys…this movie might be the best book adaptation I’ve ever seen. As always, Spoiler Warning.  END_OF_DOCUMENT_TOKEN_TO_BE_REPLACED