Hello all you foolish mortals and neurotic vampires! It’s the MONTH OF SPOOKS and that means I, your humble horror host, will be delivering weekly content all about the things that creep, the peeps that crawl, and the horrible undulating monstrosities that go bump in the night! No time of year energizes me more than this stretch of 30 days and unfortunately it goes by in a flash. So bring out your blood bags and call your skeleton friends and let’s get this party started!
Buckle up folks, this is gonna be a long one.

Charles Beaumont is less well known than he should be. An outrageously prolific writer, Beaumont wrote a short story every week of his life from his early 20s until the day he died at thirty-eight. He’s responsible for the stories that inspired some of the most classic episodes of The Twilight Zone – five of which we’ll be looking at today. His stories are all energetic, polished, and above all infused with a sense of wonder and fun. Fun isn’t necessarily the word you’d most associate with horror, but Beaumont struck an amazing balance between the light-hearted and the macabre.

Perchance to Dream is a collection that exemplifies this balance wonderfully. It’s a selection of twenty-three of his best stories. And we’re gonna look at them all! Again, this is gonna be a long one. I’m gonna try to limit each story to just one paragraph each – with one notable exception. And I won’t be rating them because, with the aforementioned notable exception, all of the stories range from good to masterful. Enough talk, let’s get started!
Perchance to Dream
One of Beaumont’s most famous stories and the basis for an episode of The Twilight Zone. A man is afraid to go to sleep because he’s been having a dream that’s leading up to his death. He knows if he dreams one more time, he’ll die. He’s talking to a psychiatrist about the issue and he dies, but not in the way he expected.

The Jungle
Probably too long for its own good. A white dude wants to build a crazy city in Africa to help curb overpopulation. He destroys huge swaths of jungle to do this despite the protestation of the natives. Everyone dies due to…voodoo? Basically voodoo. The depiction of the African tribe is questionable, but unlike most other writers of the time he actually goes out of his way to show them as having a culture and being more than just faceless savages. The white man is unquestionably the monster of the story. Also his wife gets eaten by a lion.

Sorcerer’s Moon
Two rival sorcerers are trying to kill each other with a hex. One of them gets the better of the other in the dumbest way possible. This may be my favorite story.

You Can’t Have Them All
A creepy dude becomes obsessed with having sex with all the beautiful women that are “his type” and devises an algorithm to find them all. He wants to do it before all the 16 and 17 year olds turn 18 and therefore he would have to start over. He’s really gross. He makes a “love potion” to make sure they all want to fuck him. He’s really gross. He’s down to the last woman but he’s bedridden because he’s so exhausted. He’s telling his story to a doctor. The doctor is the husband of the last woman. The story miiiiiiiight be bs? Cus the doctor’s wife has been having an affair for months but the man claims he just met her that morning. The doctor gives him a sedative that will keep him out of commission for several weeks. That way if the story IS true all the other girls will be 18 and he’ll kill himself by trying to fuck them all. So…the doctor…is okay with him raping all these women, as long as it’s not his wife? I feel like that’s a violation of the Hippocratic oath. This story is supposed to be funny but it’s really just unpleasant. Chock it up to 1950s views of gender. I don’t like it. One interesting thing to note is that this story is weirdly prophetic. When Charles Beaumont died it was said that he looked aged far beyond his years, which is exactly how the creepy dude looks in this story.

Fritzchen
A horrible man’s horrible son finds a weird creature on a beach. The horrible man takes the creature to his pet shop where it eats all the other animals and grows huge. The horrible son decides to set it on fire because it loves his dad more than him now…somehow. It dies. Its mom comes for revenge. I’m way too happy about a child dying.

Father, Dear Father
An asshole scientist is obsessed with going back in time to kill his father to see what happens. He’s made when he does it and nothing happens. Turns out, his mom was having an affair but he destroyed the time machine in his anger and getting it to work the first time was an accident so he’s stuck in the present. This one is literally a joke. The last line is a punchline. I love it.

The Howling Man
The basis for a classic episode of The Twilight Zone. A dude get sick and is taken in by a secluded monastery. There’s a screaming man being held in a cell. The narrator wants to free him, the monks pretend he doesn’t exist. Eventually the narrator bullies them into revealing the screaming man is Satan. The narrator frees him anyway. World War II happens, Hitler is Satan. Way to go dude. 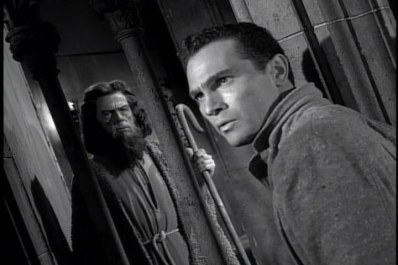 Place of Meeting
Vampires meet after the apocalypse and wonder what to do now that there are no more living things to feed from. Them being vampires is supposed to be a twist but it’s pretty obvious. Full of melancholy. I love it.

Song for a Lady
A newlywed couple goes for a cruise on an ancient ship called the Lady Anne. All the other passengers are very old and act strange around them. Like an episode of Tales from the Crypt except less cynical and the ending is happy…ish.

Blood Brother
Pure comedy. A vampire goes to a psychiatrist because he can’t stand being a vampire. It’s a major hassle. He asks the psychiatrist if he can cure him and the psych says yes. His cure is to kill him by driving a stake in his heart. The psych then calls the vampire that turned the man, upset, because he’s her fiancé and she bit another man.

In His Image
Another one turned into a Twilight Zone episode. A man kills a woman by pushing her in front of a subway. He returns to his girlfriend who he met a week before and takes her to his hometown, but it’s completely different from his memories. Turns out he’s a robot! He confronts the scientist who created him in his image. The scientist wanted to create him so that there would be a version of himself without the inhibitions that kept him from being happy, but instead the android has all of his dark impulses amplified and is compelled to kill. The android decides to let the scientist decommission him and take his place with the woman so that she will be happy.

The Monster Show
Two coked up executives have finagled their way into making sure every person on earth watches a show they’re making. They use a lot of wacked out slang. Turns out one of them is an alien and uses the show to kill all humans. Just a fun story about the dangers of TV.

The Beautiful People
This one was turned into “Number 12 Looks Just Like You,” one of the most famous episodes of The Twilight Zone. In a time when everyone is surgically altered to be beautiful, a young girl refuses. Society won’t allow it. A true masterpiece of science fiction.

Free Dirt
A greasy conman who loves nothing more than getting things – anything – for free responds to a sign advertising free dirt from a cemetery. It doesn’t end well.

The Magic Man
A tragic story about a lonely old magician. He performs a good show, delighting this crowd. He wants to pay them back for making him happy by enjoying his show so he decides to show them how the tricks are done. They all leave, angry at him for revealing how it works. He doesn’t understand why, he just wanted to show them the magic that’s all around them.

Last Rites
A dying old man who may or may not be a robot debates with a priest about whether a sufficiently advanced robot who lived for many years as a human would be allowed into heaven.

The Music of the Yellow Brass
A young aspiring bullfighter is given a chance at glory but finds out he’s only given the chance because he’s expected to die. He fights anyway. Not a whiff of the fantastic to this one, just a pure character study.

The New People
A upper-class neighborhood goes way too far with their swinging. Easily the scariest story in the book.

A Death in the Country
An old racer is worried that he’s going to die in a race on a country track. He doesn’t, but only because one of the younger racers does. Like “The Music of the Yellow Brass,” this one is all character.

Träumerei
Another one turned into a Twilight Zone episode, albeit without the fantastic ending. Two lawyers await the execution of a man who believes that he’s dreaming the entire world.

Night Ride
A psychopathic band leader encourages all his players’ depression to keep them playing well. He finds a piano player after a long search, but when the piano man starts to find happiness the band leader crushes it with devastating results. I thought this one was going to end with the band leader being Satan, but instead he’s just another schmuck who just so happens to be a good manipulator. A bit hard to read because the narration is full of overwrought jazz speak.

The New Sound
A weird dude obsessed with listening to recordings of things dying wants to find the ultimate death sound. Just when he does, his opportunity to listen is snatched away. This one is actually a lot like the Twilight Zone episode “Time Enough at Last,” but with a character that actually kind of deserves the ironic twist.

And there we have it! Twenty-three (mostly) masterful stories from an immensely talented writer. Beaumont could flit from genre to genre and still retain the touch that made his stories so immensely readable.

Thanks for taking the time to read far too many words.
See you next week!