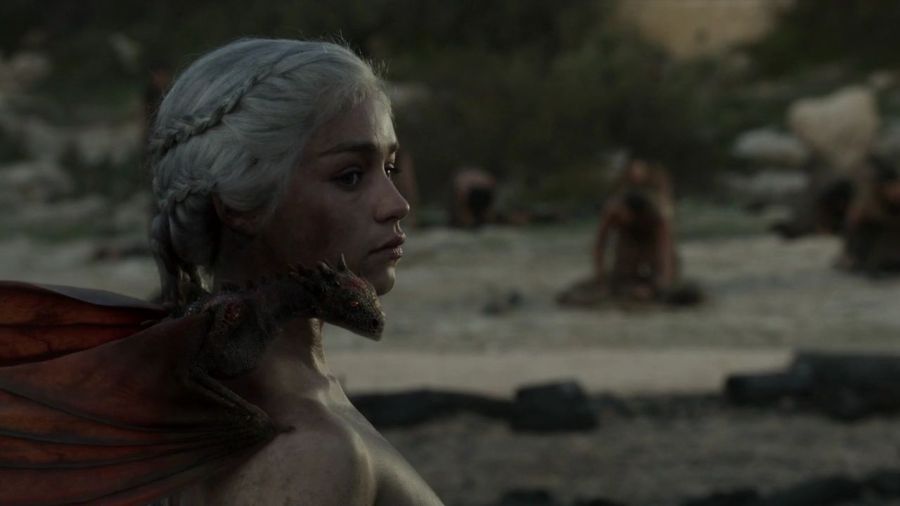 Hello all you psychic projections of your dead parent’s ghosts and welcome back to Rewind the Realm! We’ve made it to the end of Season 1 somehow, though Ned’s death still stings. And always will. The final episode of the seasons always have a delicate balance to maintain. They have to push the story forward just enough to be satisfying, but also hold back enough to make people want to see the next season. That’s not really a problem for this season of course because this season ends with MOTHERFUGGIN DRAGONS! Nothin’ gets a fantasy fan frothy quite like dragons! But we’ll get to that. We have other stuff to cover first.

Psychic boy Bran has a dream about his dead ass dad and has Osha carry him down into the crypts. They find other psychic boy Rickon down there already with Shaggydog because he also had a dream about Ned. Then they find out Ned died. And nobody ever brings up the fact that they’re obviously psychic again. Maester Luwin is a putz. But he’s got serious eyebrow game.

Tywin is pissed! Not only did Robb outsmart him and decimate his army and capture his son who also happens to be a very skilled and useful soldier, but he also finds out Tyrion is sleeping with a prostitute! Tywin’s got some real weird hangups about Tyrion and prostitutes. What’s up with that? It’s some weird Freudian shit. Especially cus he later has sex with Shae (probably). Tywin’s so weird.

Anyway he’s also mad at Joffrey for killing Ned because that means they can’t negotiate for peace with the Starks, which means the Lannisters are now openly at war with the Starks and both Baratheon brothers. In short, they fucked. He’s summoned to King’s Landing to be Hand o’ the King but even he realizes that this is a lost cause so he sends Tyrion instead. With the caveat that he is by no means to bring Shae with him. Tyrion obeys this without question.

Meanwhile in the Stark camp, Robb is pissed! His dad’s dead and he wants to murder the SHIT out of Jaime for revenge but Catelyn is a grown up and tells him that’s stupid. They still have Arya and Sansa to think about and maybe they should, I dunno, keep their valuable bargaining chip to try and keep his sisters safe. Way to not think about your sisters Robb! #patriarchy

So they’re trying to decide whether to support Stannis or Renly – despite the fact that Renly has no claim and him even being a contender is stupid #whiteprivilege #Nedtaughtyoubetter – when Greatjon Umber suggests Robb just declare himself king. Which Robb does. And so now the War of Five Kings has officially started. I mean Balon hasn’t shown up yet but who cares. I’m sure this will all work out great.

Marillion shows up to get his tongue ripped out and Joffrey shows Sansa George Bush’s head on a pike. Sansa almost makes the only sensible decision anyone has made in this episode when she comes just shy of pushing Joffrey off a tower. But of course The Hound has to be all noble and stop her and save her from being executed by Cersei. Lame. Also Joffrey has Meryn Trant slap her just to be an extra dick.

Meanwhile Arya gets bullied by Hot Pie and Lommy, the two least intimidating bullies in all of Westeros, but Gendry scares them off and sets tumblr ablaze with the fandom’s favorite non-incest ship.

We also get a scene that lets us think about Pycelle fucking. So that’s fun. Though he does bring up some good thematic points about how Aerys, Robert, and Joffrey all have good traits but they’re bad kings because a king should realize that you have to put your duty above your wants. He also starts the sentence, “The thing you need to understand about kings is…” but never gets to finish. I’m sure whatever he was going to say would have been wise and not at all stupid and sycophantic.

Jon runs away because he’s mad about Ned and wants to help Robb. His friends stop him and he’s mad at them. But then he’s not. The next day Jeor lets him know that he knows about his attempted desertion and is cool with it so long as Jon gets his shit together and stands with his brothers. Cus guess what, they’re goin’ on a big ass ranging to figure out what the FUCK is happening beyond the wall and to try and find Benjen. And so, Jeor instills in Jon what serving with honor truly means and sets him up to be the only main character who knows about the only fight that really matters. Jeor’s a baller.

Dany wakes up and realizes Mirri has played her. Her son died in childbirth, Drogo is in a vegetative state, and most of the Khalasar has abandoned them. Mirri reveals she was on that revenge shit for the destruction of her village and the fact that she had been brutalized by many of the Dothraki before Dany had stepped in to “save” her. Dany smothers Drogo with a pillow and now she’s on that revenge shit.

She builds a pyre for Drogo and has Mirri burned along with him. Mirri says her magic will keep her strong but…that doesn’t last. Dany is real wet about watching her burn. So she picks up her dragon eggs and walks into the fire, much to Jorah’s dismay. It’s unclear if she knew this was gonna work out or if she was just wanting to die or somethin, but when the sun rises and the fire burns out Dany’s still alive. And she’s got dragons yaaaaaaaaaaaaa’ll! The people remaining with her bow to her as one of the dragons shrieks and it’s badass.

And that’s the end of Season 1! This is a strong ass season of TV guys and it’s easy to see why Game of Thrones got as popular as it did. This shit’s compelling and smart, and awesome and I’ve had a hell of a good time rewatching it. All that remains to be seen is if I continue to feel that way about later seasons! See you soon!