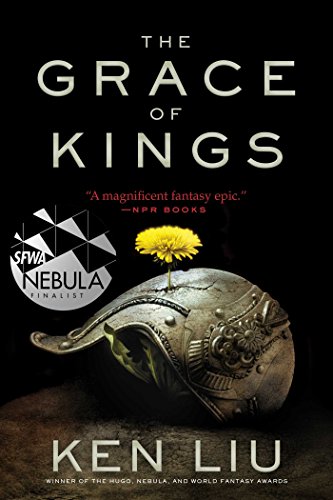 Grace of Kings is a fantasy that takes inspiration from ancient Chinese culture (hence the dynasty in Dandelion Dynasty). It’s over 600 pages, with quite a bit going on, so what I’m going to share with you right now is an extremely bare-bones summary.

The story takes place within the six islands of Dara, a nation that has been recently conquered by one of the islands’ kings, Mapidéré. The six states, as they’re referred to, were constantly warring, and Mapidéré decided that the best way to end it (and also end the poor reputation of his native Xana) was to bring them all under a single emperor. This, as you can imagine, doesn’t go over well with everyone.

After about two decades, the emperor dies (somehow *not* succumbing to any of the numerous assassination attempts), and in a move to bring the whole house down, his revenge-fueled righthand man makes it so that the emperor’s easily pliable younger son is given the reins. Soon after, two men who were supposed to be transporting criminals fake a prophecy and start a rebellion. Chaos ensues.

In all of this, there are two characters whose lives become entwined—not just with the rebellion but with each other as well. Kuni, a man who constantly disappoints his family because he’s intent on doing the “most interesting” things in life (like being a conman, for one), and Mata, the sole surviving son from a once-royal family that was stomped out during Emperor Mapidéré’s conquest, find themselves aligned with the rebels and eventually team up. Along for the ride are Kuni’s wife, Jia, and Mata’s uncle, Phin.

Rulers, rebels, and common people from all over the islands of Dara make appearances—as do the six gods who protect these islands and their people. See, they’re watching this upheaval closely, each with a personal stake in where the “winner” comes from, and sometimes that means popping on a disguise and interfering with the way things are going.

There’s a lot more that takes place in the story, but with so many intricate storylines or arcs that complete within a single chapter, that’s basically all I can tell you. What I can do, however, is share my overall thoughts about this book.

First off, for anyone who decides to dive into this story, know off the bat that the pacing is a bit strange. The prologue begins seven years into the emperor’s reign; the first chapter then jumps ahead another seven years. This kind of thing happens a lot. It’s not always as large a jump as seven years, but there are frequent time jumps between chapters and sections; even within chapters, there are jumps of months or even years!

I (and Super Hubs, who is currently in the middle of reading the book) found this to be really awkward. I get it; this is a book on par with George R.R. Martin’s A Song of Ice and Fire in terms of length and scope, but making these big leaps just left me feeling lost. Once I reached the end of the book, it makes a bit of sense why this technique was employed—to continue the ASOIAF comparison, Liu fits into one book the kind of story plot that GRRM uses across two or three. Some might praise this efficiency, but I needed more balance.

In fact, and I’m sorry to keep bringing up GRRM, but the impression I got from start to finish was that this book read like GRRM was writing the story—if he were 15 percent less talented. I feel bad about saying this. As a person of color, I completely understand how no one wants to hear about another old white guy getting praised over a writer of color. But, I’m not going to hand out a prize to someone simply because they’re not white. And what’s more, I’m not saying Liu is untalented; I just think he could use some pointers from who we at MWB consider to be one of the greatest writers of epic fantasy.

Something that I think was critically impacted by the wonky pacing was the time spent with certain characters. Jia, for example, was one of my favorites, and I felt like I barely knew anything about her. Most of her time is spent thinking about Kuni and the fact that he’s so far away, being a (albeit well-kept) prisoner of war twice, and showing up in Kuni’s thoughts when he’s doing something she might not like. Even when she starts to become relevant to both Kuni’s success and her own happiness, a time when her vast intelligence and ability to play the game come in handy, she often appears hesitant. This would be fine if I knew more about the inner workings of her brain. But because she so rarely gets to shine, and because her motivations, hopes, and dreams aren’t super explored, it’s hard for me to understand why she acts the way she does. I JUST WANT MORE JIA, IS THAT SO WRONG?!

(I do appreciate the kind of nonconformity of her relationship with Kuni . . . but I can’t speak anymore to that—or how it turns out for them—without ruining the book!)

In general, I think women are severely underserved in this book. I’M DOING IT AGAIN, BUT FUCK YOU, THIS IS MY REVIEW: Dara exists in the same kind of patriarchal society as Westeros, wherein women rarely rule, and even when they do, it’s with an asterisk. Take the princess of Amu, Kikomi. She is the only living heir of the deceased former king, but because she’s an unwed woman, she is only a princess; the rule of her island falls to her uncle, who gets the title of king. Not to spoil anything, but while she does appear in maybe four or five chapters, only two of those come from her point of view.

I get that men rule the world here, but why can’t women take up a bit more space? As ASOIAF advances, I feel like at least half of the chapters go to women. And yes, I’ve said before that Cersei is terrible and sexist against her own, but at least she’s given a fucking platform! Women in Liu’s tale, to me, seem like they’re treated by their writer as irrelevant until they do something related to one of the men.

What’s even MORE infuriating about that? Several times, one character or another points out how women in this society have a lot to offer, and could even help turn the tides in favor of the rebellion, and it STILL takes forever for that to come to fruition. And even then, *light spoiler alert*, when the woman Kuni hires to lead his army (who, until she met him, was masquerading as a man) convinces him to extend the invite to join him to women, SHE EVENTUALLY FORGETS ABOUT THEM! What the fuck!

Despite all this, I found myself invested in the story. I wanted to find out what would happen with Jia, mostly, but I also wanted to see how the story itself would turn out. I can’t help it; I’m turning into a politically charged epic fantasy junkie! I just wish that all the introduced characters felt like they were pulling their weight. That doesn’t require that they stick around forever; it just needs to feel like they were more of a character as opposed to a piece being moved around for the sake of the plot.

I had a growing sense of unease throughout the book. Because I was invested, I cared about the main players—Kuni and Mata—but with the way luck could change at the drop of a hat for anyone, no matter their station, I knew that I was going to be upset about what happened to at least one of these two men.

Without spoiling it, I will simply say that, yes, I was.

**If you feel like being spoiled though, look up the plot to the second book. Or, if you need to know the full story first, read this book but KEEP IN MIND what the name of the series is (Dandelion Dynasty, in case you forgot). I didn’t realize it until I’d finished the book, but the series title is itself a clue to how Grace of Kings concludes.**

So, there you have it. The story that takes place over the course of these 600 pages is an interesting one, but one that frequently left me feeling frustrated or confused. With 200 pages to go, SH agrees with me.

As such, we likely won’t be reading The Wall of Storms, the next book in the series. The Grace of Kings is Liu’s first novel (he was primarily a short-story writer before this), so there’s a possibility that his talent improved between this first book and the next installment. But I don’t feel great about risking it.

I’d consider reading some of his short fiction, though.

If you pick up this book, please share your thoughts! Try to convince us to read The Wall of Storms! I don’t feel quite as adamant about not continuing this series as I did with The Red Queen, so if you have a strong argument, I’m here to consider it!

May your TBR piles tower but never topple,
Nikkie