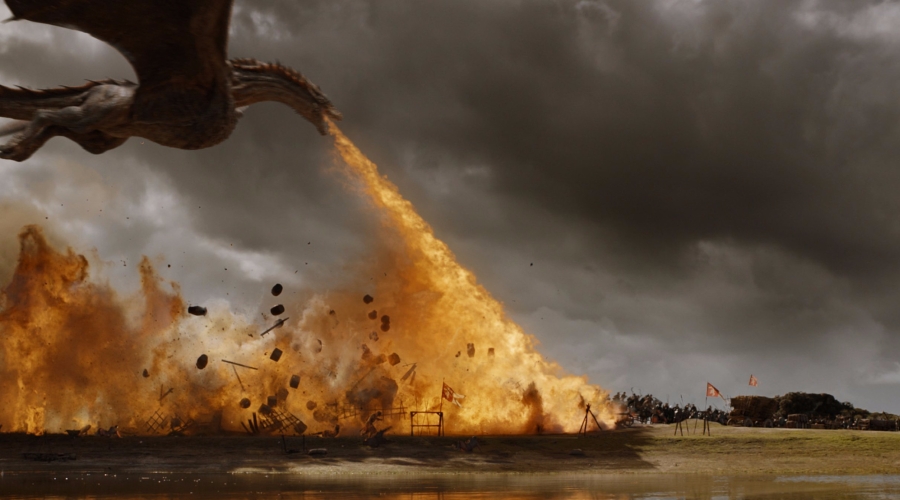 Greetings, fair travelers of the interwebs. Thanks for stopping by our humble square of digital real estate to get some not-so-sage words about one of our favorite shows.

Let us not mince these words, whether they be sage or otherwise! Dive on in, and watch out for dragon fire!

Lord MWB: Alright, I get it guys; the final battle scene was phenomenal. It was. I’m not gonna deny that. But SHUT UP! That wasn’t the most important part to me. Cool though it was, it had nothin on the #StarkSquadReunion! The Stark kids all together for the first time since season effing one! Pour one out for Rickon, you guys, cus the other kids sure didn’t. But whatever! Arya and Sansa in the same room—hugs; awkwardness. I loved it so much!

The whole scene where Arya gets stopped at the gates by bungling guards before slipping away was a little too…hammy. I get that it was a direct callback to her attempting to enter King’s Landing in season one, but in an episode so short we probably could have done without it. But when Sansa meets her down in the crypts and they’re kind of chilly toward one another before finally hugging for real… My heart guys. MY HEART.

And then we had Three-Eyed Braven throwing Littlefinger’s mantra in his face. I wonder what exactly Bran meant when he said “Do you know who this dagger belonged to?” Bran sees through all of time, so I doubt he’s asking about who tried to have him killed. Also, what was with Bran looking directly at Sansa while he returned Arya’s hug? Real weird considering he didn’t return Sansa’s hug in the last episode. And I wish he’d have thrown Meera a bone. I get that Bran is pretty much dead, but damn dude. Try to understand human feelings just a little. I still love you though, you phase-shifted weirdo.

Arya vs. Brienne was perfection. I will say no more because I’m still processing exactly how much I love it. I still don’t understand the look Sansa was giving her while watching from the rafters. But I do know that Arya’s not here for Littlefinger’s shit. Watch yer back; Arya looks like she’s itchin’ to kill a creepy uncle.

Meanwhile, on Dragonstone, Jon shows Dany his crappy paintings and tries to convince her that they’re, like, really profound and stuff. Dany’s mad at Tyrion. And Davos is keeping the strict grammar usage rules alive when it comes to the difference between “less” and “fewer.” Also, internet, here’s a lesson for you because I keep seeing you say that Stannis liked to correct people’s grammar: He didn’t. He corrected their usage. If you’re going to pretend to care about grammar, learn the difference.
Theon shows up and Jon chokes him. It’s notable that he doesn’t choke him nearly as hard as he choked Littlefinger despite Theon being directly responsible for Jon’s death. Just goes to show ya, creepy uncles are more despised than traitors.

All in all, this was a great episode. Top 10 of the series surely. It had some fun humor, some great action, and it was the first time in a while that I’ve been really breathless. And thank gourd Bronn isn’t dead!

Lady MWB: Wowee wow wow. You can probably still see my fingernail marks in Lord MWB’s arm from how much I couldn’t handle the battle scene. I. Mean. Really. I was sweating, I was shouting, I was very close to forgetting that breathing is a thing people do if they want to live. Because if something had happened to Drogon, I wasn’t sure if I wanted to live!

But I will follow my lord husband’s lead and start with our favorite Northerners. Because YAASSSSS. I literally squealed when Arya and Sansa hugged in the crypts. It was too beautiful for words. I honestly don’t think an Arya-Jon reunion would hit me harder because I was waiting to see how these estranged sisters would be with each other. And it didn’t disappoint. I thought it was such the perfect scene between the two of them.

And to the idiots saying that Sansa was looking at Arya with jealousy as the latter sparred with Brienne . . . just no. No to all of that. No to your idiot brains. No. When I watch that scene, I see someone realizing that they can’t go back to the way things were before. Sansa feared she would never see her siblings again, feared they were all dead. When Theon told her that he hadn’t actually killed Bran and Rickon, she had a glimmer of hope. When Brienne told her that she’d seen Arya with the Hound, she let herself hope just a little bit more. But that hope started to fade when Bran returned to Winterfell and wasn’t Bran anymore—confirmed by the weirwood-seeing manboy himself. It came back when she and Arya hugged not once but twice in the crypts. But watching Arya fight the woman who swore to protect her, and almost winning, Sansa realized: That’s not the sister I knew. She’s just as changed as Bran is, even though she can still articulate a thought without bringing up someone’s tortured past. To me, that is the face of someone mourning that their childhoods are truly dead because the girl twirling blades in the courtyard below could clearly do some damage—has told her that she’s done damage—and that is far beyond the argumentative tomboy who threw fits because she was no good at embroidery.

I can’t wait to see how the whole “Chaos is a ladder” thing comes back around. Considering Bran seems to spend most of his time hanging out by the weirwood tree, looking more and more like he’s going to start caressing it, I doubt that he’s going to seek out Littlefinger to finish his thought. I think it’s far more likely that LF will let this statement eat at him until he goes to find out what exactly Bran knows and whether he needs to do anything about it. So we still have a very good chance that Lord MWB’s theory of LF meeting his end because he tries to kill Bran will come true.

And she may not be dead, but poor one out for Meera Reed. I guess this means we won’t get to meet an adult Howland.

I’m not surprised that we didn’t reach a satisfactory agreement between Dany and Jon in this episode. Even with the promise of many things being resolved in the space of an episode during this season, I feel like it’s greedy to assume that this is something that could be so easily dealt with. I had a very long conversation about this at work already, so I’ll just say my two points very quickly: If Jon didn’t have to please the Northern lords’ desire to stay independent, he would’ve already bent the knee. If Dany hadn’t been losing the war up to that point, she would have been more willing to find a compromise beyond “Sure, you can take some of my dragonglass that I’m not using.” These two people have very strong goals with very specific “Can’t budge on this” items and no real understanding of how to make it work. Give them time.

Outside of that, I loved the little moment where Dany and Missandei were just girlfriends having a chat about the latter’s boo-thang. It offered up the right kind of levity to the episode.

Like a lot of people, I’m wondering what’s in store for Tyrion. I don’t know if I agree with people who think he was questioning his allegiances as he watched the battle wage on, likely seeing men he might have known get turned to straight-up ash. I do believe that Dany brought him as a form of punishment to get him to think about his allegiances, though. What other purpose is there for having him around in this moment? He’s not the best military man, even if he did help hold things together at the Battle on Blackwater Bay back in season two. And while the argument could be made that she brought him so that he could do some negotiating on her behalf with people she captures post-battle, I think it was mostly a “See what happens to people who cross me.” situation.
I don’t think he’ll leave her side, though. Right now, he needs her to get rid of Cersei. And as much as he loves Jaime, I don’t think that love will be enough to make him #TeamLannister again considering half that team wants him to die for a crime he didn’t even commit (and then one he did). So to abandon his post as Dany’s Hand would not be the best move on his part . . . and she’s probably kill him now that her blood’s all up. I also think that Tyrion is constantly trying to prove himself, and that’s going to motivate him to redeem himself in Dany’s eyes. Sure, most of what she said to him was said in a moment of passion and anger, but things *have* been a bit of a mess since she’s followed his advice. And he’s not going to want to leave it like that—not when he’s had some actual wins in that column in the past. So I’d like to think the tension between these two won’t last for very long. Plus, there was an interview that Peter Dinklage gave saying that part of Tyrion’s problem this season is that he’s got feelings for Dany, and the only way he could articulate that is if it comes up in the material. And that’s yet to be seen. So I can’t believe that they’ll stay on the outs.

As for the battle, I really thought the show was going to do us a bamboozle and completely wreck the Jaime-as-valonqar theory by burning him up via dragon fire! That would’ve been insane! Before that, I was certain Bronn was going to die because the close-to-ground tracking shots very much felt like a “final moments with a dead man” scene. It was so intense.

I believe it was Bronn who tackled Jaime into the water to save him, not Dickon as many people say. We already saw Bronn abandon his spilled money to try and take down Drogon (and, I mean, he landed, so arguably Bronn succeeded), so I feel like he would’ve gone to the trouble of risking his own life to try and get Jaime out of the way of danger.

Speaking of Drogon: I haven’t see a damn soul say “He used tail whip” on the Scorpion. Because he friggin used tail whip. And the more I laugh about this Pokemon reference, the more I’m like “Yes. Drogon is Charizard.” I know I’m definitely not the first one to come up with this comparison, but it needs to be surfaced again.

That’s it for today, kiddos. It looks like next week is bringing us back beyond the Wall, which means we get more of Tormund—though likely without the Mantzoukas face unless Brienne manages to make her way up there as well. It’ll be interesting to see who (or what) else joins Jon on this journey.