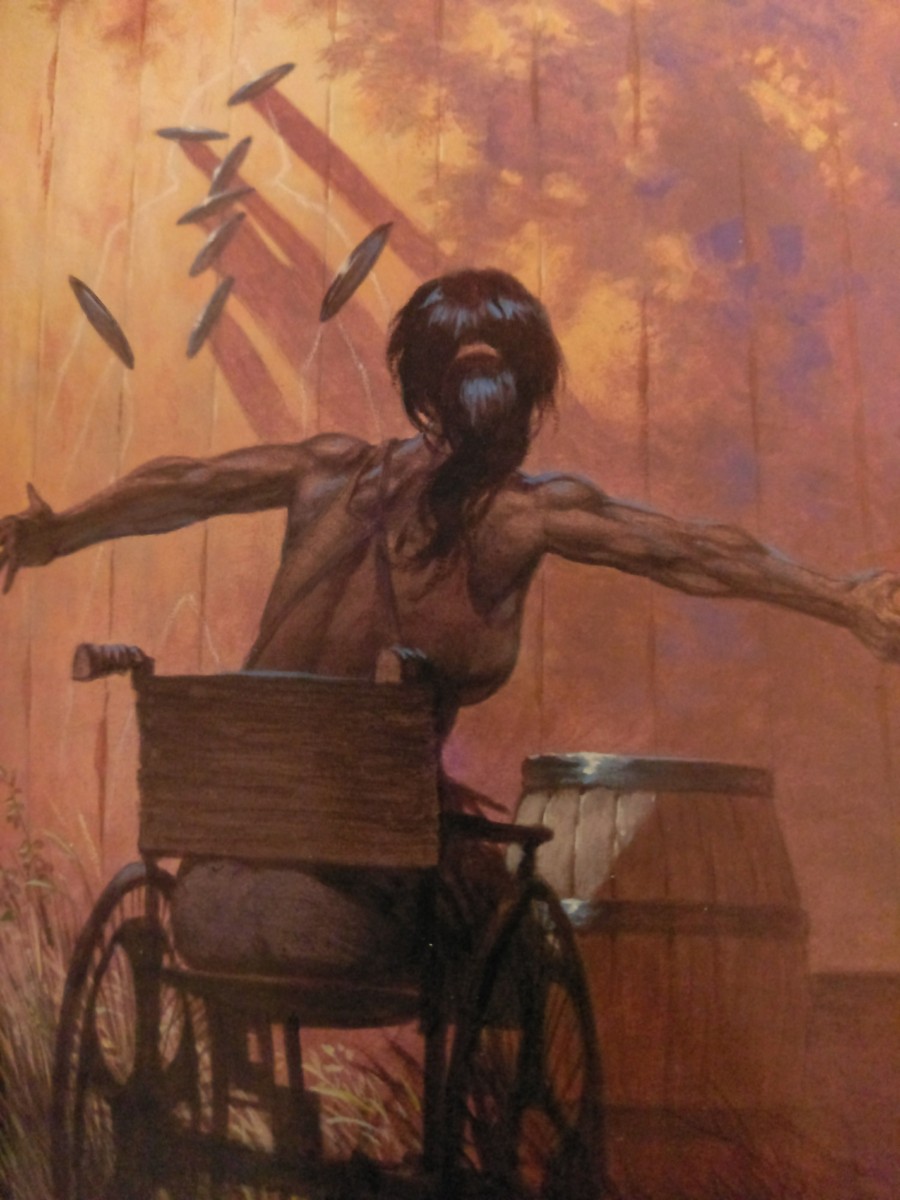 Salutations, beautiful people! It’s ya girl Nikkie, and I see you’ve come back for seconds of my femme-filled Character Crush posting. Well, who am I to disappoint?

The answer is someone who frequently disappoints but is trying really hard not to!

Today’s helping of fictional women’s history is brought to you courtesy of my rereading of the Dark Tower series in preparation of the movie coming out this summer. As far as I know, she’s not appearing in the movie (which raises a lot of questions; I will hold my tongue until an official trailer comes out), but she’s a big part of the novels.
That’s right. I’m talking about Mrs. Susannah Dean, formerly Odetta Holmes/Detta Walker and one of the last gunslingers.

For those of you who don’t know anything about the Dark Tower series . . . I really don’t have time to go into a whole thing about it! The long and short of it is that Roland (to be played by Idris Elba in the film) is searching for the Dark Tower, which is the center of all the universes and contains all the worlds. Along the way, he brings into his world three New Yorkers, each pulled from a different when, and one of them is a woman named Odetta Holmes. Except she’s also named Detta Walker.

You see, Odetta and Detta both live inside the same mind. Detta manifests after a serial killer drops a brick on Odetta’s head; instead of killing her, Detta is born. She mostly lies dormant until that same serial killer pushes Odetta in front of a subway train. Once again, she doesn’t die, but her legs are cut off at the knees, and Detta becomes more prominent. Neither woman knows the other exists until Roland brings them to his world and has them face each other. That is when a third woman is born: Susannah Dean. Susannah was her middle name back in New York (regardless of who she was being), and Dean comes from her informal marriage to one of Roland’s other NYC implants, Eddie Dean.

Susannah is the perfect sum of her former parts. Odetta was lovely and intelligent, but far too sanctimonious; Detta was cunning and undeterred by her disability, but dangerous and fueled entirely by spite, lust, and rage. Susannah is an actual person. When it comes to gunslinging, she does let Detta out a little more, apparent by an over-indulgent (read: comically stereotypical) accent. But for the most part, she is her own person, and she’s a bad ass.

To get the obvious out of the way: It’s pretty cool that Susannah is both a woman of color and a disabled character.

It normally doesn’t make a difference to me whether a major character in a book I’m reading is a POC; I don’t need a character to share my skin color to see myself in them. But at the same time, I kind of really love that Susannah is black (though, coming from the ’60s, she apparently prefers Negro to black). I feel like it comes up in ways that make sense, and once it stops being relevant to storytelling, it’s not shoved in your face. Susannah is a lot more than her blackness, but it’s a properly acknowledged part of her as well.

The same goes for her disability. Susannah often needs a wheelchair to navigate the world, but she’s quite capable of moving around on her hands and leg remnants—often with a deftness no one anticipates. Needing the wheelchair doesn’t impede her ability to shoot (after all, a gunslinger aims with their eye, not their hand OR their leg), and references to her being disabled are handled in a way that keeps it just below the forefront of your mind when she’s the focus, which I think is best. I wouldn’t want everything about her to scream “SHE NEEDS A WHEELCHAIR CUZ SHE AIN’T GOT NO LEGS,” but at the same time, the fact that she’s missing the lower part of her legs shouldn’t be danced around. It’s a fact of her life that’s more relevant at some times than others, just like any other aspect.

Perhaps I’m not entirely allowed to say this because I only represent two of the three demographics, but I never feel like Susannah is being treated like a mascot for any of these marginalized groups. She is a character who plays as important a role as anyone else in the group. She’s one of the last gunslingers! That means she’s basically a knight! It’s not entirely clear if she’s the first lady gunslinger, but I think she is, and that makes her even MORE awesome.

My one sour note: I feel like Stephen King has no idea how black hair works. Odetta definitely got her hair relaxed. By series’ end, she’s spent who knows how long in a world that doesn’t have relaxers or leave-in conditioners. There’s no way she could’ve maintained straightened hair, and ol’ Stevie King doesn’t do a great job of describing her hair transformation.

What I love most about Susannah is that she deals with a lot of shit and she never lets it fully break her down. She’s brought (semi-against her will because she was actually Detta at the time, and Detta did not come quietly) to a new world where the comforts of her affluent life are nowhere to be found. She finds out she’s been living with another personality in her mind for years. She begins training to be a gunslinger, which is a knight-lord and peacekeeper, while joining Roland on a quest to put all the worlds to right. Her life is constantly put in danger due to forces trying to keep them away from the Tower. She becomes pregnant with the evil offspring of the Crimson King, who is the antagonistic force behind all the big bads, and her body is snatched by a succubus who wants to be the child’s mother. She also gets cancer from radiation exposure or something. Can you imagine?! I certainly can’t.
(Also, uhhh . . . spoiler alert.)

Her adaptability is just one of the things that makes her a true gunslinger. The punches may be hard, and it may seems like they don’t stop coming, but you gotta roll with them all the same until you can land a few of your own. I think Susannah learns this lesson best of the transplanted gunslingers; in a lot of ways, she might be the best of them. (She’s certainly the sharpest shooter. She also picks up another weapon—sharpened plates called Rizas that have a feminist background—that none of her boys can quite figure out, as another example of her adaptability.)
She’s also very adept at cutting through bullshit, a necessary gunslinger quality. Eddie and Jake (the other New Yorker, who IS in the movie) can do it too, but they both have various mental blocks that can cause them to dance around issues for self-preservation. If Susannah stays silent, it’s because she deems it prudent to wait. But don’t try her patience for too long; she doesn’t have time for masculine pigheadedness or vain secrecy. The path to the Tower is deadly, and she wants to make it to the end with her loved ones intact. So nonsense from anyone (even Roland) isn’t tolerated for long.

Some of you might not like this next bit, but I do, so you can shove it.
Susannah makes this group of people a family. If Roland is the dad, Susannah is the daughter, mother, sister, and wife. She transitions into each of these roles flawlessly, stepping up or stepping back when the moment calls for it. While she looks up to Roland as the unquestioned leader of their ka-tet, she also helps him understand how to be a parent to Jake (and sometimes to Eddie). She is the stability to Eddie’s (often reactionary) buffoonery, the emotional compass to Roland’s rigidity, and the like-mindedness that Jake can find solace in as a direct contrast to his NYC upbringing.
They’re not a family if any one of them is missing, but without Susannah, they wouldn’t work as well.

So, there you have it! My Character Crush on one Mrs. Susannah Dean, a gun-totin’, Riza-throwin’ BAMF who doesn’t need her entire legs to take. you. out. I close out this mini-series next week with a film character, and as of this post, I haven’t picked her yet . . . So  I can’t give you a hint! Sucks to be you!

May your TBR piles feature lots of ladies,
Nikkie