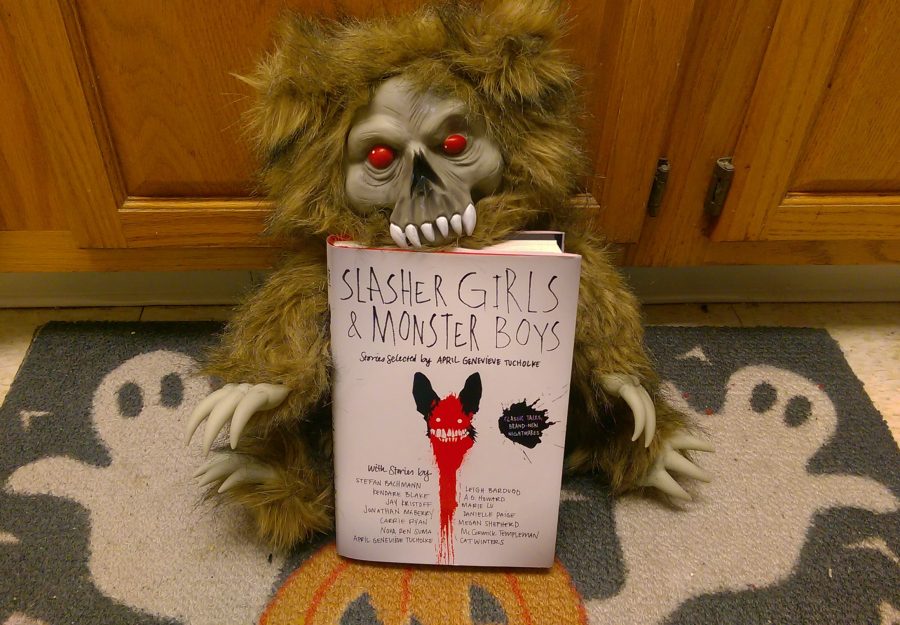 Howdy ya’ll! Super Hubs here with another short story anthology review. Today we’re talking Slasher Girls & Monster Boys, a YA collection edited by April Genevieve Tucholke. The stories in this one are of a darker variety, with many of them having an outright horror bent. Each of the stories is based on either a movie, a song, or another short story—though mostly they’re inspired by movies. Part of the fun, at least for me, was trying to figure out what each story was inspired by, so I won’t be spoiling that for you (and they list the influences at the end for your convenience)! We’ll be going through the stories one by one and giving a brief synopsis/review. S’gonna be fun!

“The Birds of Azalea Street” by Nova Ren Suma: A group of teen girls plots how to take revenge on a neighborhood pervert. Their parents don’t believe them when they try to tell them how uncomfortable the guy makes them, and when he all but molests one of their friends, they decide something has to be done. When the man comes home with a shockingly gorgeous woman, they think she’s been kidnapped or is a mail-order bride being held against their will. They break into the house to rescue her, but things take a supernatural turn. There’s a subplot about all the birds disappearing from the neighborhood and it’s heavily implied that the man has been killing them. The story is predictable but good, and the ending was interesting. I would give it a second read at least. It was one of the easiest to figure out the inspiration for.

“In The Forest Dark and Deep” by Carrie Ryan: Possibly the darkest story in the collection and possibly my favorite. Cus that’s who I am. This one is another super easy one to figure out the inspiration for. It’s hard to talk about this one much without totally spoiling it, so I’ll keep it very brief. The story jumps back and forth between time periods and follows a girl at seven years old and seventeen. When she’s seven, she meets a giant rabbit in the woods; there are no survivors. Wonderfully creepy and wonderfully dark, I’ve already read this story a few times so that should tell you something. Worth the price of admission for this story alone.

“Emmaline” by Cat Winters: This story is in the genre that I call melancholy horror. Set in Northern France in 1918, the story follows a lonely girl in an attack wooing an American soldier. To say any more would spoil everything (though the story is kind of predictable). It’s wonderfully written and full of longing, and I love it.

“Verse Chorus Verse” by Leigh Bardugo: This is the first story not based on a movie or short story. Instead, it’s based on a song. And it gets waaaaaaaaaaay Lovecraftian. It’s about a manipulative mother, celebrity culture, and social media. The ending is shocking, and the story drips with dread. Another one that makes the book worth the price. Read it, dammit!

“Hide And Seek” by Megan Shepherd: A girl is killed by her stepdad and gets the chance to play a game against Death to come back. Death’s messenger is a man named Crow Cullum, a character the girl knows from stories her grandmother told her. Crow Cullum is supposed to be an impartial observer, but throughout the story it seems that he’s not quite as impartial as he suggests. I…wanted to like this one more than I did. I like most of the story elements and the ending is fun, but the Crow Cullum character is very Hot Topic and the deus ex machinas are very contrived. It’s worth a read, but it could have been better.

“The Dark, Scary Parts and All” by Danielle Paige: Here’s a weird thing. I remember liking this story. I remember liking the writing and the pace and the ending. I remember thinking the characters were pretty good, better than I thought they were going to be and what their inspirations would suggest. I remember all that…but I don’t really remember what happened in the story. The Antichrist is in it. I think. Or I might be conflating it with a different story. I don’t know what that means for the story’s quality. Full disclosure: I read it very very very late at night so maybe that’s why I can’t remember.

“The Flicker, The Fingers, The Beat, The Sigh” by April Genevieve Tucholke: Written by the editor of the collection, this one is probably one of the best written of the bunch. The characters are pretty tropey but they’re all three dimensional and realistic. This one’s pretty easy to figure out the inspiration for, in fact I think the only way you wouldn’t would be by not having seen the movie. It’s a simple story that follows the classic shitty-teens-get-their-comeuppance formula but it’s well told. I breezed through it in about ten minutes which is more than could be said for some of the other stories. Revealing any of the plot would basically give away the inspiration so you’ll just have to trust me on this one. You trust me don’t you guys?

“Fat Girl With A Knife” by Jonathan Maberry: A lonely girl who’s been tormented by her classmates all her life takes advantage of a zombie outbreak to get revenge. An angry, vicious story full of ugliness. I love it. Honestly, that’s all you need to know.

“Sleepless” by Jay Kristoff: A serial killer uses chatrooms to lure young girls to their deaths. It’s every internet horror story your parents told you to make sure you didn’t post nudes on your Myspace or meet strangers met online. It throws in a revenge story twist, which is kind of fun. Otherwise, I don’t really like it much. It’s longer than it needs to be and the pace is slow, and it’s a lot of chat messages being sent back and forth. Not my least favorite in the collection, but I probably wouldn’t read it again.

“M” by Stefan Bachmann: Based on the German film of the same name; I know I said I wouldn’t tell you the inspirations, but the story is called “M” and involves a child killer… They’re not exactly trying to hide it. There are possibly ghosts, or maybe not. Lots of ambiguity. Suffice it to say the killer gets what he deserves. I didn’t like this story, but I really, really wanted to.

“The Girl Without a Face” by Marie Lu: A teen boy is plagued by nightmares of a girl without a face and his closet door opening in the night. He starts to lose his grip on reality, and neighbors claim they see him wandering around at night. His rich parents allude to a psychiatrist and some sort of trauma in his past. Guess what! Date rape. You see it coming from a mile away, pretty much as soon as it mentions the girl without a face and the fact that his dad is a powerful lawyer. Not a bad story because predictable isn’t bad; in fact, it’s written pretty well.

“A Girl Who Dreamed of Snow” by McCormick Templeman: The most tonally unique of the stories, this one is a fantasy story about a civilization of witches being hunted to extinction by a warlike society. Each side believes that the other is responsible for a great plague that has swept through the country and affects only women. The story switches between the POV of one of the witches and a member of a party who is hunting her. It explores the relationship between their people and how they came to be at war, and as usual the conflict stems from misunderstandings and each side’s fear of the other. Overall, it’s a very sad story, but one of the best in the book.

“Stitches” by A.G. Howard: This is a weird one. I think I like it. Basically an abusive father agrees to sell his limbs to a weirdo doctor who claims he can make him a better person. His oldest daughter does the dismembering, and a man comes to collect the parts whenever there’s a thunderstorm. They replace his limbs with other limbs that the collector brings, and the dad does become a better person. The twist at the end is super strange, but I’m pretty sure it’s amazing. I’ve read the story three times, and I’m still not sure exactly how I feel about it. Which must mean that I like it since I’ve read it so many times. It’s weird!

“On The I-5” by Kendare Blake: I really like this story. It’s the shortest in the collection, but it builds a very interesting world in what little time it has. It’s basically a vengeful ghost story with a twist. It’s full of sadness and loneliness and righteous anger, and I love it. It’s hard to talk about anything else without totally spoiling it, but suffice it to say it was a great way to close out the collection.

And there you have it! A fun collection with an interesting gimmick and mostly good stories. Some of them are a little longer than necessary, some of them have uneven tones, and some of them are fantastic. It’s not the best short story collection I’ve ever read but not the worst either. It’s worth the cost, and I definitely recommend it if you’re in the mood for a little eeriness and a bit of the old ultra violence.